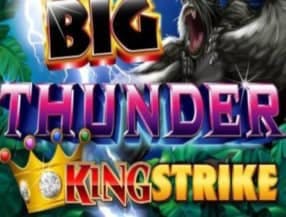 Ainsworth launched this slot back in 2013 and at that time the games tended to be quite less generous than now. Hence, we are not surprised that the RTP of this slot is only 94.38%.

The game has five rollers and three heights, in addition to an extra box on the right in which a crown can appear (that is why King in the title). Paylines are 30. The game allows you to choose the number of lines you want to play, so the minimum bet is from a penny.

Special functions - The Gorilla is the King of the Jungle

As in Ainsworth they have not wanted to enter polemics, in this jungle there are no lions, so, at least here, the gorilla is the indisputable king. Jokes aside, it is also the wildcard that, as often happens, can be replaced by any symbol less the scatter. It can appear on rollers 3, 4 and 5.

The scatter is a thunder. If it appears three times in the same run, it will activate the bonus, which consists of 15 free runs.

In the bonus, X3 and X5 multipliers may appear. The scatter may also appear another three times so that five more free rolls are added. It is interesting the fact that some prizes payments improve in the bonus.

Also, we have the crown that can appear in the extra box. If 5 equal symbols of 9 to AS are achieved with a joker involved and the crown appears, you will win the mini jackpot. If there are five high payment symbols, with a wildcard involved the jackpot minor is achieved. The Maxi and the Major are achieved as respectively but achieving the five equal symbols without the help of wildcards.

The design of this game is good, as long as we have in mind that it already has more of an antique lustro.

Apart from gorillas and thunder, serpents, indigenous shields, totems, waterfalls and drums will appear among the symbols.

There is no background music, but apart from the typical sound effects by turning the rollers and winning a prize, we will hear the thunder when the scatter and the gorilla appears when the wildcard helps us complete a winning combination.

The prizes and jackpots

In the base game, the most pay symbol is the scatter that paids x50 the bet. Next the next best payment corresponds to four scatters or five waterfalls or five drums, which are paid to x20 and then five snakes or shields to X15.

In the bonus, some prizes improve. For example, five gorillas or five scatters are paid x200, but five snakes or shields are still paying X20.

It is a good game and proof of this is that more than five years after its launch is still entertaining when playing.

The prizes are also interesting and the possibility of making the jackpots offers a special attraction. On the other hand, the RTP is too low and that should always be taken into account if money is going to bet.

In summary, we have a good opinion of this slot.

Do you want to try it? Put to play Big Thunder King Strike for free right now with Slotjava.