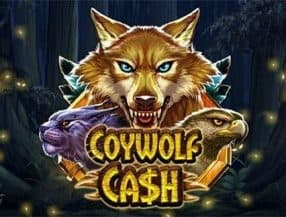 The online slot Coywolf Cash is one of the bets for 2022 of Play'n Go. A very careful slot and whose theme leads us to an American forest where the animals are mixed with the totems of the natives. A mix of the classic and the new that we have analyzed in detail to discover everything that awaits you in this new online slots that will soon be available in the best online casinos in Australian.

Online slots COWYWOLF CASH: In the totem is the prize

Visually this slot has the expected vision of the theme: an American forest where the native animals and the tribes of Native Americans are mixed to bring you many prizes. Music is really very rhythmic, we would almost say trepidant and visually have details that we have loved. One of them is that the figures of the animals move slightly when the rollers are fixed. It may seem like a smaller detail, but it breaks with the herratism of the slots in which the animations are only produced in the prizes.

As for the game dynamics, Coywolf Cash has a known and classic configuration of 5 rollers per 3 rows, with up to 50 prize lines and 10 figures at stake without counting the wildcards that we will see later. Bets range between 0.10 and 100 credits per run and the maximum prize is up to 4000X the bet carried out. The prize figures in this online slot are:

As for the extras, in this online slots it has both usual, wildcard and scatter, but both with a very interesting turn. Let's start by the traditional Wild wildcard that appears in two ways according to the type of game in which we are. In the base game, the WILD will only appear with the head of the brown coyote, replacing any figure in a line of prizes. Although it may appear on all rollers, if it appears on the rollers 2 and 4 it will be fixed until the end of the roll.

The Wild Blue Coyote appears during the 'Wild Reel' round that is activated when 1 mask appears on the game screen. The Wild Reel game has 2 phases:

The free shooting set is activated when 3 or more totems appear in the game and we can obtain 8, 11 or 15 free runs depending on whether we have 3, 4 or 5 totems. During the round of free rolls we can achieve multipliers of X7 thanks to Wild wildcards.

Without being a revolutionary game, it is an interesting game and with a dynamic with the dose of enough emotion so that we recommend giving it a chance. We undoubtedly have enough evidence that this game of chance by 2022 will be at the end of our favorites.