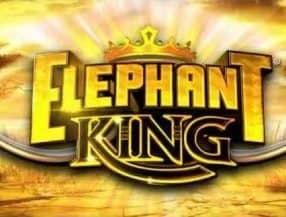 Elephant King is part of the "Waterfall Games" family of the IGT game developer, who are characterized by offering the elements to collect or add prizes successively during the game session.

At the time of writing this review, Elephant King is offered exclusively at traditional casinos. However, given that it is a new game (2017) and that has had great success, it is very likely that an online version of the game is also launched. This spectacular Safari has 5 rollers of 3 heights, with 40 pay lines and a maximum prize is 25,000,000 coins.

The pay lines earn with 3 or more equal symbols in adjacent rollers, from left to right. The bet limits are somewhat strange: they are paid in multiples of 75 coins, with a minimum limit of 0.75 credits and a maximum bet of 15,000 coins.

The main symbol of the game, which is paid to 500 coins by 5 in a payment line, is the elephant. The other 3 symbols of animals in the game are rhinoceros, zebra and impala, followed by 5 amulets with precious stones of different colors (red, yellow, blue, green and aquamarine).

The two special symbols are the Wildcard "Wild", and the scatter, which is a circular symbol with an elephant seen from front insert as in a mandala. The wildcard may appear stacked on some occasions, but in any case only exits in the central rollers (2nd, 3rd and 4th) and the elephant on the other hand, it only appears in the odd (1st, 3rd and 5th).

The scatter is the only symbol of the game that can not be replaced by wildcard, and starts the PRIZE DISK function, when it appears on any of the rollers. During the Free Shot Bonus, the scatter can appear on any roller, and not only in the odds.

This is the perfect video slot for players who seek to bet with low limits and are lovers of the wild world. Designed in earth colored ranges, animals appear in very defined symbols, simple animations made with impeccable graphics and a perfect soundtrack to set up this animal adventure.

And for those who prefer Slots High Roller, they have only to increase the bet limit. The interface is designed to entertain and stay concentrated in prolonged game sessions, which is perfect to activate all its special functions several times, and reach your maximum RTP (96.2%).

If you liked Elephant King, you should try ...

This is a relatively simple game but with functions and Very attractive game dynamics. Within the same family of games, IGT has also launched another grandiloquent title, Golden Egypt, which promises to make delights of the fans of Elephant King.