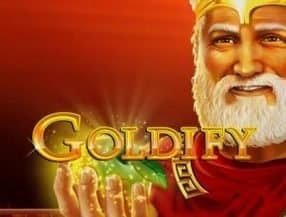 The Goldify slot is inspired by the history of the King Midas to propose a good time of fun in exchange for the possibility of a great prize. Will it be worth it? Well, the king Midas was characterized by converting everything he played in gold ... in Slots-Australia you can play Goldify for free and read our full opinion about the game.

We are facing a game released in 2015 and that means you can not expect special functions like the spectacular bonuses that the slots have today.

In this case, the main special function is the function to convert the symbol into gold, although the original name is much more muzzle: Goldify and symbol. It consists that from the game options, you can select a symbol so that your prizes become gold (here is the wink to King Midas) and its prizes multiply for five.

The scatter is a golden flower that will give you between 15 and 100 free thrown away if it appears 3, 4 or 5 times. Before the free rolls begin, you can apply the Goldify function to a number of symbols equivalent to the number of scatters you have taken to activate the runs. Imagine potential profits if you multiply the prizes of up to five symbols for five!

Design - Welcome to the Kingdom of Midas

The design of the game is very simple, since we will simply see symbols related to the Roman Empire, but we will not enjoy great animations ... well in reality of any animation.

Among the symbols we have King Midas himself, his daughter the princess, a pegasus, a helmet, a harp, a ring, an amphora, a column and an apple.

In addition, the game has an animated background music that transmits some adventurous spirit and provides some dynamism to a game experience, which otherwise is too static.

The wildcard is the King Midas that, as always, replaces all the symbols minus the scatter.

The daughter of the King Midas pays X400 per line by five appearances, the Pegaso X300 and the Casco X160. Remember that the symbol you decide to apply the Goldify function, multiplies the X5 Prize, so that in the previous examples we would obtain X2000, X1500 and X800 respectively.

The symbol that is most paid is the wild card, the King Midas, paying X2000 for 5 appearances, but you can not apply the Goldify function.

Although the maximum prize in a combination is not stratospheric (x2000), the accumulated prizes in the bonus considering that it is possible to obtain up to 100 free runs are incredible. However, if you are used to modern slots, the game falls short in design and gameplay.

Therefore, it will depend a lot on your personal tastes. If you like games with good animations, this will get bored, but if you are one of those who seek the simple, it can be a fantastic option.

Get to play Goldify for free and decide yourself.