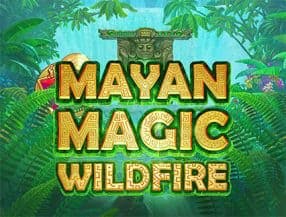 This video slot is inspired by the imaginary of the Mayan world; A magical world and nature exaltation.

The bottom of the screen shows us an imposing waterfall, surrounded by leafy vegetation, typically tropical. In the background, we observed an imposing Mayan statue on which the symbols are distributed in a 5 × 3 format.

The musical background is relaxing and even mystical to enjoy a quiet game but with interesting special functions.

The symbols are beautifully designed and with special emphasis on realism, and the details of these warrior characters, who used very particular decorative elements.

The greater payment symbol is represented by a woman with a huge golden headdress, which gives an air of Deity. She follows the warrior with the yellow headdress, and then another warrior with a giant bird mask, which is shown in profile. The leopard and serpent are followed, animals of great power for the Mayan culture.

The low payment symbols are represented by gems and precious stones. The greater payment are shown embedded in golden elements, and the minors, are represented in diamond form suspended on the board.

This slot has 10 fixed payment lines and interesting bonus functions.

Maya wildcards: This wildcard is represented by the word "Mayan Wild", and is activated when you manage to land this symbol in the three central reels. It will also transform the central position of the central reel into a wildcard that will remain stuck throughout the function. Landed wildcards will stay there during the next turn, and each one rewards you with an additional turn. The multipliers will increase by one each third wildcard that appears.

Mysterious synchrony: it is activated randomly in any turn. It consists of synchronizing the symbols of the three central reels to offer you more chances of winning.

If you are one of those who prefer a relaxing game, which evokes these historical characters so surrounded by mysticism and symbolism, in this game you will enjoy both the content that underlies entertainment, both from the presentation and application of state-of-the-art technology for that entertainment.

This and many other titles are available completely free at best-slots-australia.com

There you can opt for the demo version to explore the game before daring to make bets with real money.