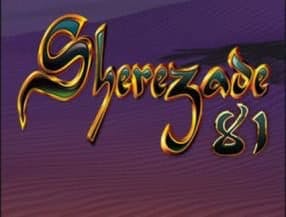 Sherezade is the protagonist princess that we find in one of the richest stories of all time; She rich as to the imaginary she contains associated with the eastern world. Arabian Nights It is a book that evokes the dreams and richness of the ancient East.

The Persian imaginary is quite rich in elements related to the golden riches and precious stones of kings and sultans who lived in a very distant era. This game takes the protagonists of this story filed and puts it at the service of the entertainment so that players can, in addition, achieve 81 ways to combine unusually the symbols that appear on the screen.

If you are looking for a game that allows you to generously increase your profits in an environment that stimulates your imagination and evokes the dream of the impossible, this game will provide excellent prizes if you take it seriously.

The graphics remind us of the Disney movie Aladine, since we find the representations of several symbols like, a girl like Jasmín (who represents Sherezade, the daughter of the Sultan); the blue muscular genius (whose animation transforms it into a cobra); The genius lamp, the Arabian-style palace, an hourglass, a pair of swords or Arab daggers, a book with leather lid - maybe be the famous, classic literature, which we mentioned above -; Another symbols are the window of Islamic arch, from which it is seen towards the starry night with the immense moon full of background; Another characters is the one who could be the Sultan, with abundant beard, turban and precious stones in his head. The SCATTER symbol is S. Icons appear on a background of a starry night, which gives even more weight to the idea of Arabian Nights.

The musical background has no more particularity than bells and sounds that highlight the combinations achieved. They are sounds in the style of Arabic music where the ropes with metallic tones highlight.

The multiplication levels are X1 or X2. The genius is the wildcard you can afford up to x2, x4 if it appears twice, and x8 if it appears three times. After the scatter symbol that pays up to five times the bet, follow the princess, then the sheikh, then the book, followed by the palace, the window, the daggers, the clock, and finally, the lamp. These last three paying the same thing.

There is also the double bonus round or nothing to duplicate in just one chance your profits.

Sherezade will make you travel in time and surrender to the long and magical night where the impossible goes reality.