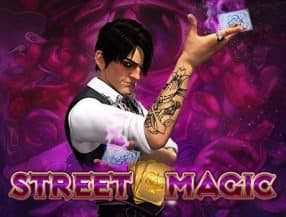 This video slot is inspired by the theme of magic, illusionism and escapism. The main character reminds us of the famous modern magician called Criss Angel, who with a similar aspect, performed shows of magic and illusionism in the streets of New York.

This game has several special functions that allow players to multiply their profits in bets ranging from 0.20 to 100.

The wildcard symbol is represented by the golden letters, and rewards you - along with the ring with the violet stone - the highest amount according to the value of your bet.

Then follow the clock, then the padlock with the key, then the sword through diamond AS, then handcuffs.

This video slot has 20 fixed payment lines, which are distributed in its 5 × 4 format.

The scatter symbol is represented by the magician, which has a cards in the hands in the form of a fan.

This symbol triggers special functions. This symbol is also a wildcard and can replace any other symbol to help in winning combinations. When you achieve two of these characters one of the three magic shows will take place in the reels, so, get ready!

The expandable man: the magician falls from above leaving a white dust behind his landing - or appearance. This Wild or wildcard symbol occupies the entire reel, and as its name indicates it, it is because wildcard has expanded in a 4 × 1 format along the reel.

The second function or show of magic is the conveyor man: this show implies that unexpectedly another scatter symbol appears to trigger a round of free spins.

The wild deck: four wildcard symbols are placed randomly at the reels positions.

Free throws: Three magician symbols unleashed this function that can reward you with 8, 10 or 12 free spins.

Also, within this level of the game of free spins, there are two special functions:

Play this and other games in your demo version to get to know the maximum without risking your bets. best-slots-australia.com offers this and much more.