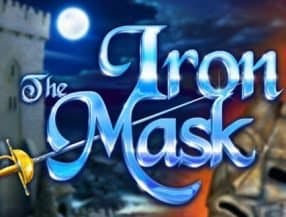 This game is inspired by a very old legend that alludes a mysterious French person nicknamed The man of the iron mask. During the seventeenth century and XVIII he was imprisoned, and while he was there, his face was covered with a mask. For this reason, the aesthetics of the game corresponds to medieval times.

Environments that take us to another era

The musical background is a clavicord, typical instrument of the time that accentuates the setting.

The 5 reels are floating in the middle of the night, in a medieval landscape. In the background we see a stone castle and on the left side of the screen we see the silhouette of a dry tree.

The game has 20 pay lines. By obtaining three symbols on the same payment line you gain 5 credits, with four symbols you gain 15 credits, and five symbols up to 100 credits.

The symbols to be combined are: the musketeer, a treasure chest, a symbol of fleur de lis, an executioner with a mallet, a cell with a padlock and some chains, a princess of curled long hair and a character that is the king. In addition to the classic symbols J-Q-K-A, we have the symbol of the game logo, which is wildcard, and the disperser is the symbol of the cell.

On the other hand, there are several masks that can add more prizes to your booty. They are iron masks of different types. The wildcard symbol is represented by the title of the game Iron Mask And it replaces all the symbols less than the scatter symbol and the symbol of the musketeer (which is the one that activates the bonus games as free turns). When you have three scatter symbols in any position, it adds to the others obtained in the same play.

One of the special bonuses of this game are free turns, which can become up to 75 when you get three times the same symbol.

The game of the musketeer

One of the bonus rounds is the Musketeer bonus game When you achieve the three symbols of the musketeer in any position on the rollers 2, 3 and 4. Accesses at this level of the game, in which the musketeer must release the king that is imprisoned.

In the first part of the game, the musketeer is facing 5 possibilities of doors. Once you have chosen one of the 5 doors he must fight against the guard who custody after said door, and thus get the prize that ranges between 4 and 20 times the value of the bet.

The second phase of the mini-game is the stairs screen, where the musketeer must choose one of the three stairs to continue advancing towards the release of the king. Again, he fights with the guard, if he wins, advances to the next Mazmorra screen. Here your prize duplicates or nothing. If you are accessing the dungeon, the musketeer will rid your last battle, trying to have a bonus between 3 and 20 times the value of the bet.

The game The Iron Mask has a pretty aesthetic in accordance with the imaginary of the time of history that stars the game. The music and graphics are clearly located in the Middle Ages, but they do not fully envelop the player. There is a small step towards the stupefaction derived from audiovisual quality.

Some symbols when they are repeatedly in the same line of payment have a quite basic animation like a zoom in zoom out, while others, like the cell with chains and padlocks (representing a special symbol) has an animation of eyes looking to the sides.

Regardless of this, it is a game done to win. The Iron Mask will make you travel on a historic adventure towards entertainment with real earnings by means.