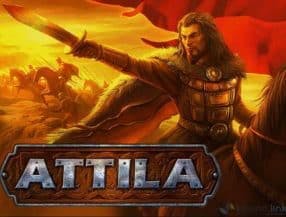 Attila de Novomatic is based on the historic Atile King character of the Huns. Therefore, in this slot you can expect truculent warriors and battles, which will take you to interesting prizes. Meet the game in depth reading our opinion or, as always, in Slots-Australia we offer you the opportunity to play at Novomatic Attila for free. You choose!

Life in Attila times was hard and austere and is something that is reflected in the RTP of this slot which is a poor 95%.

The game presents us with the classic network of five rollers and three heights with nine pay lines. Betting limits are a coin for a payment line and the maximum thousand currencies in 10 pay lines, for a total of 10,000 coins. The game allows you to choose between 1, 3, 5, 7, 9 and 10 pay lines.

Attila should not be a very sophisticated person and the slot goes on the same line. Here there are no great flourishes in the bonuses or special effects.

We have a wildcard that replaces all the symbols less than the scatter, and the scatter itself, which is an image of a battle, which offers you 16 free strips with an X3 multiplier.

The design - Warriors and weapons everywhere

The design of a slot over Attila had to be war. That's how it is. The most important symbol is Atila's face that is wildcard. The scatter, as we have already said, is the image of a battlefield.

We will also see archers, horse soldiers and infantry soldiers in hand. Weapons like axes and arches of arrows.

The sound has nothing to do with ancestral times. There is no music and sound effects are electronic. A pity, because in Slots-Australia we think it is important that music and effects are chord to the subject to achieve good atmosphere.

The war of the prizes

The highest prize is achieved by applying the multiplier by 3, which is achieved in the free runs. You will need the appearance of five wildcards, as this would result in a payment of 30,000 times your bet.

In the base game, without the multiplier, the maximum profit is 10,000 times your bet. Five appearances of 9, which is the symbol that fewer pays, would give you 100 times the bet, which is not bad.

It is a simple slot with great prizes, but in which it costs winning combinations. Over time, the game becomes somewhat linear and more of the same. It is one of those slots that you immediately introduce you in the zombie mode of throwing without thinking.

There are many slots on warriors with Storylines and more accomplished settings, but if you want to try this game without risking, in Slotjava you can play FREE to Attila.