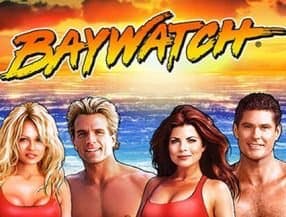 We go to the sunny beaches of Los Angeles from the hand of the Creator of Gaming IGT and the online Baywatch Slots, dedicated to the mythical series of the 90 "beach watchers". A great dose of nostalgia and many prizes are waiting for you at this mid-scale Machine Slot that IGT has adapted to HTML5 language and to be played from any PC or mobile device.
Join us in this honest review of Baywatch online slot.

ONLINE BAYWATCH OF IGT: Luck awaits you in the bay

During the 2010 decade the slots dedicated to mythical television series like Baywatch were very fashionable. In all of them we found a cliché that is repeated: use the characters and icons, in addition to their music, to create an attractive slot.
In the case of Baywatch the game, even considering that it is from 2017, it is short and suffers from a graphic and sound simplicity that disappoints us. It is, only, of a slot with simplon graphics and a tremendously repetitive background of the shore of the beach.
Dynamics of the game

Despite the simplicity of its interface and graphics, Baywatch is an online slot and everything depends on its game dynamics, which we have also analyzed. Here we find the most classic configuration of video slot: 5 rollers for 3 rows and a total of 15 possible prize lines. IGT informs us that the theoretical RTP of this game is located between 92.54% and 96.25%, standing in the middle risk. Betting is performed at 15 lines and extra functions (25 credits) and regulated the value of each currency, standing between 2 and 3000, with 75000 credits the maximum bet we can do.
Figures are divided into two blocks

• Thematic figures that, ordered from lower to the highest prize are: binoculars, lifeguard, quad, all terrain and the salvage boat
• Beach watchers: The maximum prizes will be granted the characters of the series, with David Husselhoff being the maximum prize with 100x the bet if 5 figures appear on a prize line.

During the base game and randomly, the vigilantes of the beach can be combined in 'team', forming a new figure of a couple that multiplies and improves the prizes. Thus, with 5 figures by David Husselhoff and Pamela Anderson will receive 250x bet, this being the maximum prize.

In this online slots we find two usual bonuses. On the one hand we have wildcard WILD, which appears as a large wave of surf and can be randomly expanding to occupy the entire roller. This figure only appears in the rollers 2, 3 and 4.
On the other we have the Bonus figure, which will also appear on the rollers 2, 3 and 4 and that open the round of free runs. At the time of starting the Round of Free Shots we must choose between 1 of the 4 characters: two men and two women. With one grooved more fixed figures and less thrown and with each other, more thrown and fewer fixed figures. The minimum of free runs are 3 and maximum 12.
In the free shooting game, the figures of the beach watchers always appear as 'team' and the prizes are the same.

A slot over the beach watchers could not have almost anything bad. Only by that nostalgia of the 90 is worth taking a look, but we also find a series of extras and bonuses, also in the base game, which have hooked us. Yes, we would have liked to find graphics at the height of the series category, but everything remains forgiven thanks to its game dynamics, acceptable both for novices and for players who look for risk.