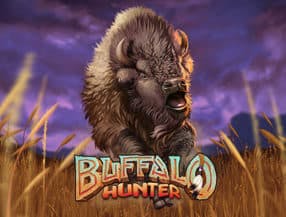 Today in Slots-Australia we offer you the opportunity to play for free Buffalo Hunter of Nolimitcity. A slot that will transport you to a meadow in which you will want to witness the appearance of several animals. Of course, the buffalo is the star of the place.

The numbers of Buffalo Hunter

The RTP is a just 96.01% that is enough to save the furniture and not spoil the game if the rest of characteristics are good.

The game network consists of five rollers with four heights and is played with 40 pay lines. The bet per line is calculated by dividing the total bet between 10, which can be 20 cents, up to 100 euros.

Among the special symbols we have the wildcard, which replaces all the symbols, the Mystery, which is changed by a payment symbol, and the scatter that can activate the free-run bonus if it appears three times.

When the scatter appears three times, you can choose between the function Buffalo Horde O Prairie Multipliers. According to Nolimitcity, the optimal choice is Buffalo Horde. In either case, they give you 8 turns. If they were 4 scatters, it would be 10 turns and if they were five, the Stampede Super Bonus function would be activated.

Bonuses have special rollers more favorable than those of the base game.

Prairie Multipliers is that when the buffalo comes out with energy, you will distinguish it because its edge will be bright, will be filled by the animals on the left. Each five buffalo is filled by an animal and this entails that increases the multiplier into a unit and get two extra free spins. In addition, the buffalo itself also increases the multiplier at the same rhythm as the animals on the left. The maximum multiplier is X5.

Buffalo Horade is that instead of increasing the multiplier, each time an animal fills up its energy level, it becomes buffalo. In this way, more and more buffaloses are more likely to appear in the following free strips. In addition, when filling an animal, as in Prairie Multipliers, you will also give you two extra runs more.

Stampede Super Bonus It is the combination at the same time of the two previous bonuses.

Background we have a meadow, and something dry, on which the clouds advance in the sky. The rollers present us typical animals of North America: the buffalo, the eagle, a wild cat, a fox and a deer.

The background music reminds Andean music with his flutes and percussions and is accompanied by the sound of the eagles.

The quality of the graphics is pretty good, so in summary, it is a game with a good setting.

The wild card and the buffalo pay x50 by five appearances. The next symbol that is most paid is the eagle that paid x20.

We are facing a good slot that achieves a game dynamic with enough diversity thanks to the two types of bonus, the mysterious symbol and having a superbone that combines the basic bonuses.

The potential prize is ambitious and enough rt. It is not a game that breaks schemes, because the topic is pretty herd, but we believe it is a game with which you can enjoy.

Do you want to play Buffalo Hunter for free? Give him to start game!