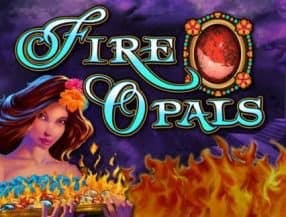 Created by IGT and premiered with great acceptance in traditional casinos, the online version of Fire Opals is also triumphant. It is one of the video-slots with hexagonal structure and Multyway Xtra function of this international operator, with an exotic and mysterious topic to equal parts.

Fire Opals is a 5 roller slots with a hexagonal grill (3-4-5-4-3) and 720 combinations from 3 equal symbols in contiguous rollers, counted from both directions. Your RTP oscillates depending on whether special functions are activated during the game session: from 92.99% to 94.92%.

Allows you to play from a minimum bet of 50 coins per run and a maximum of 1,500, in sections selectable by multiples of 50. The largest prize you can get with the highest winning combination are 100,000 coins per run; 25,000,000 coins activating special functions.

Apart from his theme intriguing about the power of fire in the Hawaiian volcanoes, the best of Fire Opals are their extras and special functions: It has multiway function Xtra, wildcards, scatters with multipliers, free-running bonuses, stacked symbols ...

All the game revolves around the idea of Hawaiian mystical exoticism. That is why the symbols represent a woman of the islands, an orchid, a flower called bird of paradise and a volcano, in addition to fire opals (polished gems of different colors. The rest of symbols correspond to traditional symbols of slots, With the letters of the main figures of the French deck (K, Q and J).

Among all these symbols, the most valuable is the logo "Fire Opals", which rewards your bet X2,000: If for example you play with 50 coins you could get 100,000 coins. In each roll, only the highest reward you get with each symbol are paid.

The Wilders' Wild ", which may appear stacked in the central rollers (2nd, 3rd and 4th), replace all the symbols except the" scatter ", which reports an award by multiplying the amount of your total bet per run, starting 3 or more on the screen:
– 3 scatters: X3
– 4 scatters: X20
– 5 scatters: X100

The setting of the game is inspired only vaguely surroundings from Hawaii, with the omnipresent vision of its background volcanoes: the base game is located on a background of purple light, and the bonus rounds on the cloudy summit of volcanoes.

Far from creating a cordial and relaxing atmosphere, the truth is that both the scenarios and the sound effects and the mystery halo that surrounds everything, make you keep in constant tension while playing.

Fire Opals is not a slot for anyone: your minimum bet of 50 coins per run is quite high. The prizes are not frequent, but it is true that when you get one it is quite impressive. So yes, you are not a High Roller, our advice is that you decante by other titles like Diamond Queen also available to play for free on our page.