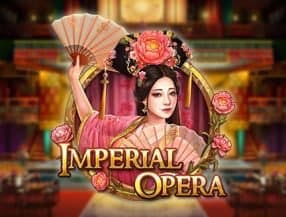 This video slot is inspired by the eastern imagination, specifically associated with the imperial opera. The background of the screen is a theater, a palace with architecture and typical oriental decoration.

PLAYNGO does not skimp on game themes, graphic details and especially in the musicalization of games.

The scatter is represented by a giant gong with the word "free spins". It is a symbol that is shown in 3 × 3 format and is visible only during the bonus function called "Harmony", when three adjacent lanes show this symbol.

Once this symbol lands during the "Harmony" function, 10 free spin will be triggered.

The reels 2, 3 and 4 are always to synchronize during the bonus. When they land scatter symbols in the medium of the reels, the bonuses are activated.

In this game you can earn up to 2500 times the value of your bet.

The symbol of wildcard is represented by a dancer or a woman dressed in a rose with a fan in her hand and a typical hairstyle. Then, a very long beard character is followed, which is held with his left hand then, on the payments scale follows a character similar to the latter, only that he has a cane in his left hand. The last character has a different hat and a parchment in his hands. They are imperial opera characters.

Despite being seen as an Asian style game, balanced, harmonious and so on, when good combinations are achieved it sounds true rock'n'roll, which refreshes us the idea that we are not in front of any game, but playing one of PLAYNGO, where music is more than atmosphere.

If you want to play this and other games of the best video game developers for Online casino., Enter best-slots-australia.com So you can play the demo version before investing your real money.