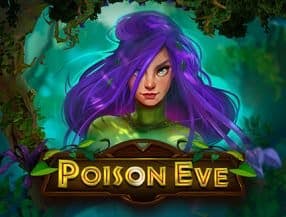 This video slot is inspired by the sensual side of the poison. It is about the representation of poison ivy, with an adapted name of Poison Ivy to Poison Eve, who is a character of the classic DC comics.

This poisonous seductive appears under a comic aesthetic with a relaxing and charming musical background (like her). The background is a mysterious forest with fireflies and beautifully designed symbols.

This video slot developed by NolimitCity, is presented in a 5 × 3 format with 20 fixed pay lines and interesting special bonus functions.

The Vine Wilds function is activated when the wild cards land, and expand until they cover the reel on which they are. This function can be activated only in the medium reel during the main game.

The magic liquid function is activated when you manage to obtain the symbol of the poison in the first reel during the main game. All the symbols represented by bottles will remain in the reels to be transformed into this special poison symbol. When you achieve that this symbol is in all reels you will get 2000 times the value of your bet!

The power of the powerful flower is activated when you manage to obtain the bonus symbol, represented by a colorful flower, in the hot zone (Hot Zone).

Each of these symbols will open a portal that will remain for three to twelve turns on the left side, which is not being occupied by the portal. In this function, the last reel will always have the portal. While this function is active all the portals can generate symbols (minus the Bonus symbol), and all reels that are not portals, will expand their symbols to cover the entire reel. Payments will be calculated according to the number of symbols along the winning line.

This video slot has 12 symbols among which we find: the protagonist of the game, which is a symbol represented in 1 × 3, and rewards you appearing three, four, and up to five times. Followed by red potion, yellow potion, blue potion, and green potion. Finally we find the low payment symbols, which are represented by the letters A, K, Q, J, 10 with some leaves coming out of them.

If you are interested in the games inspired by comics, Poison Eve must be on your list! Many other titles developed by Nolimitcity are fully available free and safely in their demo version on our best-slots-australia.com page. There you can enjoy a series of various titles of multiple video game developers for online casinos, where you will surely find the one that best suits your tastes and demands.