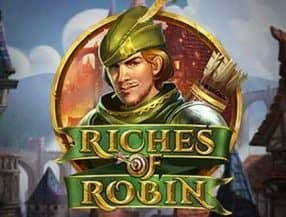 This video slot is inspired by the legendary English Medieval Character Robin Hood who defended the poor and oppressed with their bow and arrow, escaping from justice which forced him to live hidden in the forests but always willing to do justice with his own hands.

The Legend of Robin Hood becomes a game:

It is a slot inspired by the adventure, riches and treasures that can reach the hands of this hero of medieval history.

Among the symbols we find the characters in history in a caricature format and set in the medieval streets of Nottingham where injustice and poverty reign.

The symbol of Robin Hood is the greater payment, then a guerrior maid, which could be Lady Marian, nothing more and nothing less than Robin Hood's girlfriend; Then other characters of the society of the time as a musician who touches the lute and another character who eats a chicken thigh and drinks a jug of beer.

We also find the traditional payment symbols represented by the heart, the diamond, the clover, and the pike. It is a game that has a reel format distributed in 5 × 3 with 20 fixed pay lines.

The time of justice at the hands of Robin Hood:

Among the special bonus functions we find free spins and bonus game, extra turns, multipliers, random multipliers, re-turns, and symbols that are stuck in the reels during subsequent turns to ensure more chances of winning.

One of the remarkable features of this game is that it has a very high volatility, placing it in a 10/10 category. This allows your bet to multiply up to 10,000 x!

Among the special functions we find the "quick shot" (Quick Hit), which is activated randomly when you lose a turn. This allows you to get profits through the symbol of the coin bag (and it is that Robin Hood is very good with the most needy).

Another of the special functions is the "Heist Respite", a bonus round that is activated when you achieve four symbols or more of the bag of coins in your reels. This bonus rewards you with three re-turns.

When the Round of free spins is triggered thanks to the scatter symbol that appears on the reel 2 and 4 simultaneously, you can randomly receive a free set number including 6, 8, 10, 12, 14 or up to 20, what which makes multiplication to win oscillate between 2x and 5x the value of your bet.

The scatter symbol when it appears during the bonus round adds two free twists with a multiplication of 1x.

PLAYNGO has rescued a classic theme to give you a new freshness always from the highest technology in entertainment and video games for online casinos. The graphics, as well as the different functions of the game, make this title one that can not be missing on your list of games to know.

If you are interested in games with a high volatility, or heroic and medieval thematic, the legendary Robin Hood surely has some saved coins for you.

You can play many other titles of both PLAYNG and other game developers in a free way on our best-slots-australia.com website