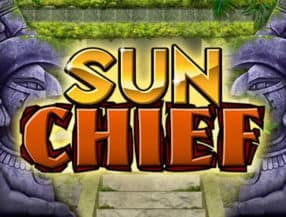 Sun Chief is a slot for Ainsworth, launched in 2017, on the Aztec theme. Will they have managed to get out of this topic so hard of the slots? Read our review and find out or get to play for free Sun Chief by clicking Start game.

The numbers of Sun Chief

We have no choice but to start our review of this slot with a disappointment, since the game RTP is only 94.06%. Seen in perspective, in 2017, there were several slots with similar figures, but today it is too low.

The game is developed in five rollers. The first two, have three heights and the third, fourth and fifth have four.

You can play up to 10 pay lines, but they are not fixed. If you wish, you can play less. Thanks to that, it offers great flexibility in the amount to bet, which goes from a centete to 100 euros per line, ie € 3000 in a single bet.

The most common special function of this game is that wildcard appears stacking occupying the entire roller. It can only appear on the rollers three, four and five.

The scatter is the solar stone and you need three to activate the bonus. This consists of 8 free spins. If two scatters appear in one of those runs you will get five extra free extracts.

During the bonus, on the roller three a shield can appear with a multiplier that goes from one to five. That is, the shield is kept in place for 4 rolls and in each of them the multiplier increases in a unit. So, when it appears for the first time, it will be x1. Then, in the first of the 4 runs, X2, in the second X3, etc. Once it arrives at X5, it is kept in place until the end of the free runs.

In the free runs, wildcard can only appear on the four and five rollers, but if it appears, it will be kept on the site for three runs.

The design - Everything you can expect from the Aztec world

Background we have some Aztec sculptures that seem to be part of a temple and it is intuited that everything is located in the middle jungle.

Among the symbols we have pumas, eagles, toucans and flames, in addition to an Aztec chief, a temple and solar stone. There is no background music, but the sound effects accompany well.

Taking into account that it is a slot of a few years ago, the design fulfills its function.

The symbol that best pay is the temple. With five appearances multiply your bet per line by 750. The second best symbol is the eagle that is paid at a rate of 250 times your bet by line.

In the bonus, the prizes change. For example, the temple is paid at 120 times your bet per line. If we add the potential of the X5 multiplier, we have an excellent prize of 600 times your bet by line. The eagle, paid x80. It is true that during the bonus it is likely to challenge profits and the total award will be greater, but even so it is a bit disappointing that the payment by the combinations has been lowered.

This slot would have everything if the RTP was not so low. The little generosity of Ainsworth with this game spoils, in our opinion, which could be a very worthy title yet today.

If you do not want it to be affected by the RTP, you can play Sun Chief for free here.