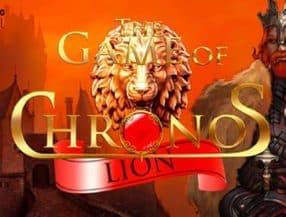 The Game of Chronos Lion

This is another possible versions of The Game of Chronos. On this occasion the main character is a warrior with a lion.

The same symbology applies to all the games. That is, we found the symbol of the main character, then we have the symbol with the logo of the game, the hourglass, the scepter, ring, jewelry and gems. What changes is scenography, since the subject is still battle.

The bottom of the screen seems to be the main room of a great castle. On each side of the screen we see a spiral column and the reels floating in the center.

The main character is a warrior or Viking with a hair and reddish beard, a suit and, on the back, a skin of an animal protecting from the cold. He has a metallic helmet that discovers his nose in the style of Scandinavian warriors.

The structure and aesthetics are maintained in this miniseries of games. The variant has to do with a couple in combat: the warrior and the animal of him. In this case we see that the red tones predominate: and the chalice - which is one of the symbols that is most paid - is made in red, just like the crown and the scepter with the head of Leon - which has red eyes - , then we have a ring with a lion, and the image of the emblem of The House of Lion, with a lion roaring.

The acoustics is equal to the other editions of the game, we heard metallic sounds when spinning the reels, and there is little enveloping atmosphere -musically speaking.

Special characteristics of the game

It is a video slot machine of 40 pay lines and 5 reels or rollers. It is considered a medium volatility game, that is, the chances of winning a fat prize is not so far away. The maximum prize is 30,600 euros and has an RTP of 93.98%. The bets range from 0.01 to 40 per payment line.

By getting 3 symbols of the lion house emblem you win 80 credits. This is the dispersed prize. The game logo pays up to 20,000 credits, the crown and the chalice are followed with 10,000, then the scepter, the ring, the coin and the ruby heart 8,000 and the gems of spikes, clover, oval and diamond pay 4,000.

The wildcard is the symbol of the "red man" or the warrior. In the free games round thanks to 3 sand watches, you can get up to 96 free spins. Among the emblematic bonus rounds is "double or nothing", where players have the opportunity to risk and try to duplicate or lose ... who does not risk or win or lose right?

So if you are ready to explore the world of this Lonino gentleman, do not wait any longer and try the free demo version and do not expose yourself to make undue bets for ignorance.