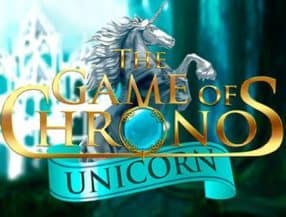 The Game of Chronos Unicorn

Following another variant of The Game of Chronos, on this occasion we have a female protagonist that is part of the game of unicorn. Here the predominant tones are the turquoise, and evoke more to femininity. The background of the game looks like a terrace or an open space. Maybe a castle? The elements float in the middle of the screen in 5 reels, among which are very delicate and really beautiful detailed symbols.

Taste for the precious

With a taste refinement for detail, The Game of Chronos Unicorn transports us to a combat scenario but with airs of seduction. The beautiful blonde girl has a way of spelling by her beauty. The game is presented with high standards of audiovisual quality, although the theme is of yesteryear. There is a modernization in its aesthetics, and in the way that image is represented by graphics.

In this series of games we have the same symbols and the pay table only that the emblematic animal of the game, changes. In this case we will have, a crystal shape scepter and then the emblem of The House of the Unicorn with a unicorn Corcoving. Then we also have the Game Logo The Game of Chronos, the golden currency, a ring with an immense stone that could be a crystal, or some beautiful blue stone - like turquoise. The chalice is also turquoise color with celestial. Next we have the protagonist symbol, which is a blonde with a braid that falls on her shoulder forward of her. She possesses a crown on her forehead and a necklace, but she has a challenging warrior look although she looks almost angelic.

With 40 pay lines and 5 reels or rollers, like the other series of the series, The Game of Chronos Unicorn, is considered a medium-low volatility game. The Maximum Award is 30,600 euros and has an RTP of 93.98% with bets ranging from 0.01 to 40 per payment line.

By getting 3 symbols of the emblem of the unicorn house you gain 80 credits. This is the dispersed prize. The game logo pays up to 20,000 credits, the crown and the chalice are followed with 10,000, then the scepter, the ring, the coin and the ruby heart 8,000 and the gems of spikes, clover, oval and diamond pay 4,000. The wildcard is the symbol of the princess-warrior. In the free games round thanks to 3 sand watches, you can get up to 96 free spins. There are typical bonus rounds between frank recreational games, such as "double or nothing", where players can instantly duplicate their profits.

The Game of Chronos Unicorn emphasizes us that everything can happen, but for magic to happen you have to trust the fantasy. Let yourself be involved by a world of battle in the midst of colorful riches and fantastic possibilities.