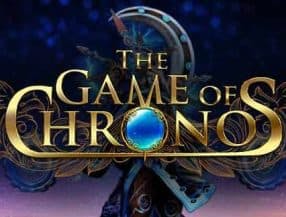 The Game of Chronos

This video slot game is developed by giving priority to details and a precious aesthetics, where the brightness is in detail and thoroughness. It consists of 5 reels and up to 40 pay lines. The bonus function allows you to activate up to 96 free spins per session played. It has an RTP of 95.1%, and reading the prizes is from left to right.

The elements at stake are on a deep purple background with columns that mark the area of reels and gives the feeling of being in an enchanted palace.

The queen is a sensual woman with black crown, very little clothes and a crow on her left arm. In addition, there are symbols that represent jewelry, precious stones and riches, tale such as ring, crown, a scepter, a chalice and varied gems in the form of oval, heart, spades, clover and diamond. There is also a symbol of a coin with a seal difficult to understand due to the large amount of minute details in its relief. There is also the symbol that says "The Casa del Cuervo", where this dark bird appears with his red eyes, reminding us of a certain dark spirit in this mysterious castle. The other symbol of the game is the logo of the game in Dorado that says "The game of chronos".

The crow symbol is the scatter that can multiply up to x3 your bet, and Queen Raven is the wildcard or Wild that can replace any symbol.

The hourglass is a symbol that when landing 3 times on the screen will allow you to enter a parallel world of game in which you can multiply your profits. This world is the free spin bonus where your first prize is 10 free spins, of which you can get 15 more turns until you reward you with 96 free spins in total. The game of Chronos is a game in which time, which is represented by the hourglass is the main option to increase your bets.

This game is heard and it looks pretty good. Its sound effects while rotating the reels are metallic, then the musical background is when you access the free spins, where music highlights its celtic essence with a background bag.

By appearing the crow 3 times, it gives rise to the animation of the symbol and it is when we see the evil crow Grazar and flutter. Likewise, each bonus has a special animation which makes it visually very attractive, in addition to the number of symbols and pay lines makes it a very dynamic game in which you have the feeling of being progressing quickly towards your fortune.

If you like aesthetic games that remind us of the Celtic world, with symbolic animals, dark gems and queens, the game of chronos, will know how to reward your game time.