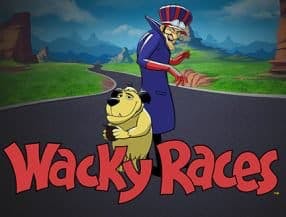 Do you remember the 'crazy cars'? A fabulous and knowledgeable television series that serves as a basis for this crazy and fun free slot machine of the online gaming Bally Software. Discover with us this free slots now!

The crazy cars have returned

Wacky Races is the English name of this knowledgeable American animation series that serves Bally Software to create another fantastic free online slot machine. Following the wake of machines such as Wonder Woman or Titanic, this time we are presented with a free Machine Slot vertical with some peculiarities that we will detail below.

Little can be added on this machine as it follows the wake of the magnificent creations of Bally. Here we have the characters of this television series taken to the computer screen with a lot of detail, taking care of the aesthetics to the fullest. In addition to having some graphics and animations totally faithful to the originals, the game is accompanied by a happy music that will remember the one we could hear on the television series. You can deactivate this music at any time by clicking on the configuration button that you will find at the bottom left of the screen.

Finally, the most current Bally machines have been scheduled in HTML5 language, allowing you to play without having to install any type of program on your Windows, Mac OS or Linux. On mobile devices you can play directly without having to use an adapted version, without losing sight of this game is specially adapted to vertical screens, being indicated to play from mobile devices.

This game has a vertical arrangement, different from the usual ones in other online slot machines, so Wacky Races has five rollers and four rows and up to 40 possible gaming lines.

The figures in this game are 12 and are divided among those corresponding to the traditional figures of greater value of the deck of French cards - in this case Q, K and A) - and the thematic figures of the machine. If you want to consult the figures, get additional information or see the configuration of each of the 40 prize lines, you can click on the icon you will find located above 'Better Bonuses'.

In Wacky Races you can play in AUTOPLAY mode, which will allow you to carry out a total of automatic consecutive plays determined by a total, which can be 10, 50, 100 or 200 runs. You can also select the advanced options in this Auto Play mode and choose that these runs end after a certain number of losses or benefits.

This slot machine is somewhat special, since unlike others itself has several bonuses and extras that we went to see below. We started with the WILD figure, which replaces all the figures except for the bonus and can also appear in the bonus games.

The 'MISSTER STACKED REELS' feature allows you to replace randomly at certain figures when the rotation starts. These figures are fixed on the game screen during some runs, increasing the chances of winning. This particularity of the machine can also be given during the rounds of free runs.

Another feature of this Free Machine Slot is that of the 'Wild' rollers. During the main game a roller may appear, which only contains Wild Figures. The Racing Bonus feature appears when in the machine we obtain 3 or more symbols' Wacky Races' or 'Wacky Races Wild "on the rollers 1, 3 and 5. This mini game has 5 cars in which everyone has a special prize. At Pulsar Start Race we started the race and at end this, the winning car gives us a metallic prize, free thrown away or a multiplier.

Another free game is the 'Creepy Coupe', which is one of the car race prizes and consists of 10 free spins with special features. The Mini Game Penelope PitStop consists of 12 free runs in which we can collect hearts, which will give us entitled to prizes.

Muttley Wacky Screap Yard Bonus is a game of 5 levels where we must choose between 10 options, some are prizes such as multipliers and others the end of the game. Finally, the Professor Pat game is a fortune roulette in which we can get four awards: Mini, Minor, Major and Mega.